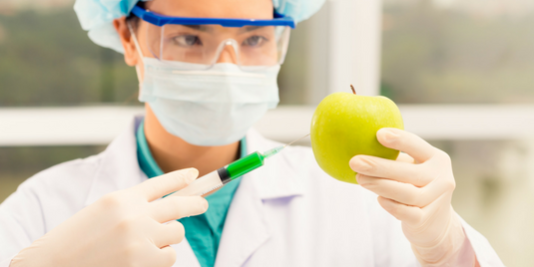 Genetically Modified Organisms – GMOs, or “genetically modified organisms”, are plants or animals created through the gene splicing techniques of biotechnology (also called genetic engineering, or GE). This experimental technology merges DNA from different species, creating unstable combination as of a plant, animal, bacterial and viral genes that cannot occur in nature or in traditional crossbreeding.

Virtually all commercial GMOs are engineered to withstand direct application of plant, animal, bacterial and viral genes that cannot occur in nature or in traditional crossbreeding. Virtually all commercial GMO’s engineered to withstand direct application of herbicide and/or to produce an insecticide. Despite biotech industry promises, none of the produce an insect…

Despite biotech industry promises, none of the GMO traits currently on the market offer increased yield, drought tolerance, enhanced nutrition, or any other consumer benefit. Meanwhile, a growing body of evidence connects GMOs with health problems, environmental damage, and violation of farmers’ and consumers’ rights.

Most developed nations do not consider GMOs to be safe. In 61 countries around the world, including Australia

What is the impact GMO on Environment?

Over 80% of all GMO s grown worldwide are engineered for herbicide tolerance. As a result, use of toxic herbicides like Roundup has increased 15 times since GMOs were introduced. GMO crops are also responsible for the emergence of “ super weeds ” and “super bugs”: which can only be killed with ever more toxic poisons like 2,4-D ( a major ingredient in Agent Orange) GMO are a direct extension of chemical agriculture, and are developed and sold by the world’s biggest chemical companies. The long-term impacts of GMOs are unknown, and once released into the environment these novel organisms cannot be recalled.

How do GMOs affect farmers?

Because GMOs are novel life forms, biotechnology companies have been able to obtain patents with which to restrict their use. As a result, the companies that make GMO’s now have the power to sue farmers whose fields are fields contaminated with GMOs, even when it is the result of inevitable drift from neighboring fields. GMOs, therefore, pose a serious threat to farmer sovereignty and to the national food security of any country where they are grown, including the United States.

THERAPEUTIC GRADE ESSENTIAL OILS: WHAT DOES THAT MEAN?
November 13, 2022

BENEFITS OF WEIGHT LOSS SUPPLEMENTS
May 25, 2018